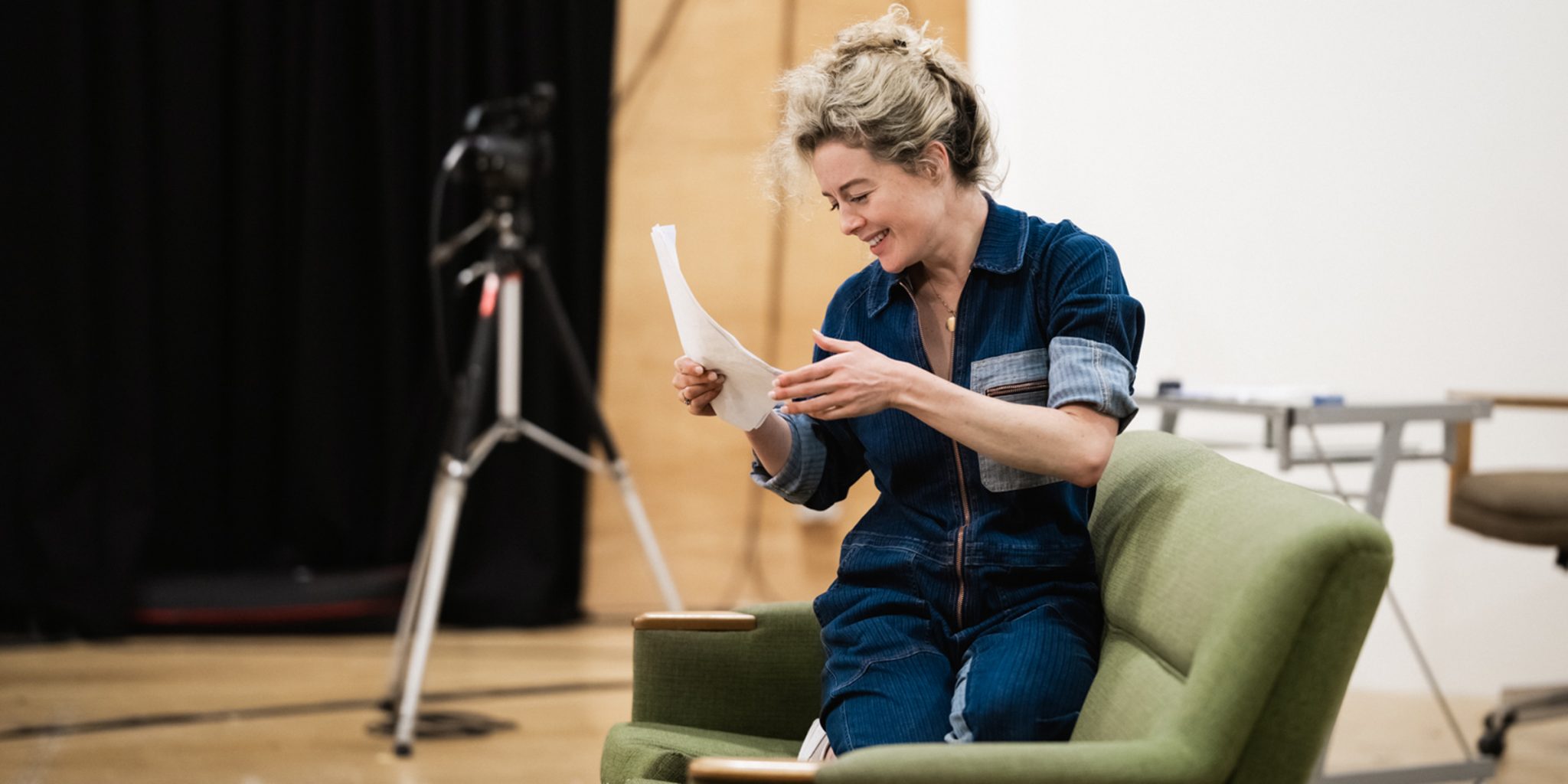 Fresh off her performance in The Picture of Dorian Gray, Nikki Shiels is ready to bring to life another unforgettable character in Dennis Kelly’s one-woman show Girls & Boys.

This year, Nikki Shiels wowed audiences as the alternate performer in The Picture of Dorian Gray. This October, she will bring to life another one-performer show in Dennis Kelly’s Girls & Boys for Melbourne Theatre Company. She chats to us about the thrill of realising stories in this intimate form, how she is approaching her character and exploring the work in rehearsals and why she will be especially attuned to audiences.

What is your relationship to or feeling towards one-performer shows?

One-performer shows are relatively new to me in my work and I find them fascinating, challenging and thrilling. The investigation into how to realise a one-person show technically and theatrically to be able to hold the audience’s attention for the length of the performance is always an exciting challenge. And I also really love the depth in the creation of a character that a one-person show allows. The leap of faith you make as the performer to bring the story into existence with live witnesses is the thrilling element. When there are no other actors on stage, the audience become your playmates and you don’t get any rehearsals with them!

In The Picture of Dorian Gray, you inhabited and juggled 26 live and pre-recorded characters, also the cameras, sets, props, video screens and costumes live on stage – a huge feat. In terms of the subject matter alone, I would say Girls & Boys poses an equally huge feat. How has your preparation differed or stayed the same for these different one-woman shows?

Interestingly, my personal preparation for these shows has been quite similar. Always, I start with the script and the language of a work to begin to create the inner life of the character. This process of filtering the language through my body and imagination informs how I approach the rehearsal room floor. However, the style and theatrical realisation of Girls & Boys is quite different from The Picture of Dorian Gray. There is an element of theatre making for me in this work, the playing space is more intimate, and the form is direct and there is immediate contact with the audience through the language of the protagonist.

What were your first thoughts when you read Dennis Kelly’s script?

I saw the play performed in London in 2018 before I read it, which was amazing because it is often the other way around for performers. I remember it being a profoundly visceral experience for me as an audience member and it stayed with me long afterwards. I bought the play from the theatre that night and read it on my way home. Firstly, I was struck by the form (which I won’t give away here), the openness and directness of the protagonist around such an emotionally traumatic experience and how the play managed to impart that experience to the audience while at the same time examine the important issues and arguments at the centre of the work.

How would you describe your character? How are you embodying her?

The protagonist of Girls & Boys is direct, disarmingly honest and relentless in her quest for factual detail. She is interrogative into humanity, violence and the societal structures that we have created as humans. She has worked her way up in the world from a working-class background in the UK to become a partner in a successful company as an executive producer in documentary filmmaking. And she is someone who has experienced a magnitude of loss that skirts the very limits of the imagination. These are all details that are informing the way I speak, walk, move and carry myself in the space. I’m focusing on embodying her first and foremost through the language that Dennis Kelly has given her. It’s so powerful and articulate and poetic and searingly blunt at times. And it is so characteristic of her. She is an expert on her experience in the world and I am working to embody her through the muscularity of her language.

What will be the most challenging and also rewarding aspect of telling this story almost every night for five weeks?

This work demands a huge amount of focus from the performer. In some ways I think the most challenging and rewarding part of performance will be staying alive to each moment within the rhythm of the piece. Remaining in control, yet flexible to the content and how it lands from night to night. The exciting part for me as always, is that the creative investigation will continue through performance and my connection to a live audience will inform so much of the piece.

Do you think this play would have the same impact if it wasn’t a one-woman show?

Definitely not. The power of this work is that at the emotional climax, you really feel as though you have shared the character’s lived experience up to the tragic event that occurs. She has lead the audience on this journey and she has developed a sense of trust and intimacy with them to be able to share the unimaginable. And she must share it. It must be witnessed for her and the audience to come out the other side and for everyone to consider the impact of the subject matter in a way that is both personal, political and an inescapable issue of contemporary society.

How has your relationship to the text, story and character developed from your first reading to now during rehearsals?

Lifting yourself off the page and into the space is an exciting and at times frustrating process. It is a place of not knowing and it is the place where you begin to inhabit and embody the character and relate to the space in order to reveal meaning for the audience. It’s often a process of trial and error and the work accumulates as you move through rehearsals. I am currently at the beginning of our final week of rehearsals where some things are beginning to fall into place and others are still just out of my reach. From the first reading of the script until now, I have a much more visceral understanding of the story and the character living inside my body and imagination in the space.

How have you worked with the creative team during rehearsals?

It has been a collaborative effort in realising the theatricality of this piece. The rehearsal room has been an open and continuous dialogue with myself, Director Kate Champion, Assistant Director Steve Phillips, Voice and Dialect Coach Geraldine Cooke-Daphner, Design Realiser Romanie Harper, Costume Realiser Sophie Woodward, Lighting Designer Amelia Lever-Davidson, Sound Designer Sidney Millar and Stage Manager Lisette Drew. Often, throughout the process, I will work on the rehearsal room floor and then we will stop and have a discussion and then I will have another go where I will try to retrieve what worked and we will workshop other creative suggestions in the space. It’s been a real team effort in that sense and although it is a ‘one-performer show’ its takes enormous amount of creative support and collaboration to arrive at that place.

How would you describe Kate Champion’s direction in realising this story?

Kate allows me complete freedom to play in the space: to fail, create and devise as a performer and theatre maker on the journey of discovering our protagonist and theatrically realising her story for the audience. This permission allows me as the performer to create a visceral connection to the text, language and storytelling of the piece, to claim the space as my own and to inhabit the character. From there we shape and create the work together: myself from the inside, Kate from the outside along with contributions from the other creatives in the rehearsal room. Kate is extremely collaborative in that way as a director with her team and everyone’s ideas for the piece are valued and put to the floor which allows the work to be the sum of its parts.

The play examines an issue which will make for uncomfortable, yet vitally important, viewing. Will you be especially attuned to the audience more so than usual?

What an interesting question. I think I most definitely will be, yes. But I don’t believe that will be due to the content of the piece alone. The form of direct address with the audience demands an aliveness to the moment from the performer which begins at the very top of the work. As the audience meets our protagonist and embarks on her journey with her, my aim as the performer, will be to create a sense of trust with the audience and stay alive to the present moment, drawing them into a space where we are able to deal with the difficult subject matter of the piece together. That said, anything can happen in the present moment in theatre, so that will be a thrilling thing to discover with Melbourne audiences.

Girls & Boys is on stage until 26 November at Arts Centre Melbourne.