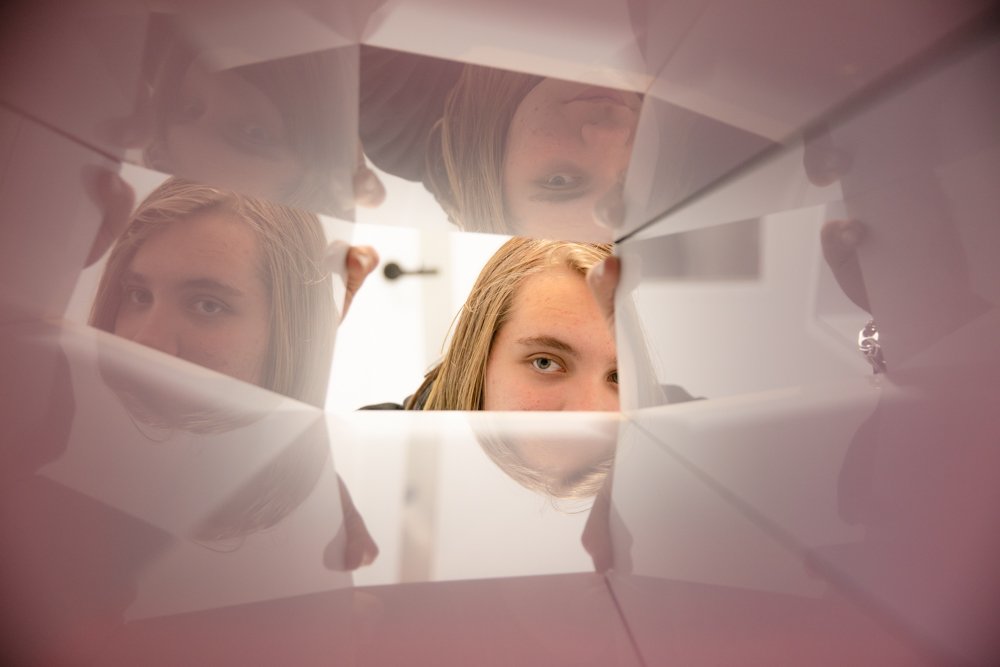 Imagine being observed through viewfinders, locked up inside a tiny, secluded room on the worst day of your life.

Being involuntarily detained in small spaces happens in Victoria at the highest rate in the country—especially among young people. The Royal Commission into Victoria’s Mental Health System recently stated that these places, called seclusion rooms, should be eliminated within the next 10 years.

Exhibiting as part of MENTAL: Head Inside, ‘Isolation Chamber’ is an installation resembling the seclusion rooms used to detain patients in Victoria. Inside, visitors may sense a small fraction of the helplessness that accompanies being surveyed from all angles under the psychiatric gaze.

The exhibit was created by Rory Randall and Indigo Daya. Rory is a consumer academic with RMIT’s School of Global, Urban and Social Studies, meanwhile Indigo works inside and out of Australia’s mental health system as an independent consultant, advocate, academic and blogger.

‘Isolation Chamber’ invites you to consider whether seclusion is an acceptable practice and asks you to imagine an ideal, hopeful and inspiring future for our mental health systems, services, places and support networks.

Seclusion is still used in Victorian psychiatric contexts, despite clear evidence of its dangers. The practice poses significant risks including re-traumatising people with a history of abuse. This is significant because research indicates a high prevalence of people who undergo seclusion have experienced complex and profound trauma during their lifetimes.

Other risks associated with seclusion include psychological harm, potential human rights abuse and severe physical injury including death. The United Nations has repeatedly called for an end to mental health practices that violate human rights, including seclusion, mechanical restraint and forced treatment.

“What I needed was for someone to hold my hand. Or to just sit with me, in my pain. To ask what happened. Maybe a hug” – Indigo Daya

While the Royal Commission has recommended seclusion and restraint be eliminated within the next 10 years, the peak body, the Victorian Mental Illness Awareness Council (VMIAC) has said this is far too long.

VMIAC developed a declaration to platform the thoughts, feelings and opinions of people with lived experience of Victoria’s mental health system. One factor mentioned in the declaration is the collective language used to group people. Less than 20% of contributors felt the term ‘mental illness’ accurately described their experience. As a result, the following descriptive statement was developed:

“We are people with lived experience of emotional distress, trauma, mental health challenges and neurodiversity” – VMIAC

The declaration also explores the kinds of mental health services that make for a welcome alternative to seclusion. The variants mentioned most frequently include; peer-run respite, recovery houses, crisis centres, peer support groups and recovery retreats. Many people also singled out the presence of nature in an ideal healing space such as gardens, trees, lawns and flowerbeds.

The contributors were very consistent in their responses regarding access. Easy walk-in services were a dominant theme, alongside 24/7 services (mental health crises don’t just happen during business hours). Affordability was also highlighted.

“We need to help, rather than harm people in need.” Indigo Daya

‘Isolation Chamber’ and its artists unapologetically advocate for an improved model of care—one grounded in compassionate healing, community support and therapeutic approaches rather than unjustifiable uses of force. Hopefully one day soon, seclusion rooms like this will be confined to exhibitions only.

Part exhibition, part experiment, MENTAL was a welcoming place to confront societal bias and stereotypes about mental health. It featured 21 works from local and international artists and research collaborators exploring different ways of being, surviving and connecting to each other.